When I started programming web applications, I focused on a very small userbase. As I gained experience, the application userbase expanded too. In the process, I had to unlearn many concepts as well. I was forced to think of high availability, zero downtime deployments, and a large  number of database read/writes etc. These lessons were learnt the hard way as I faced computational complexity – for example, when an app didn’t scale according to the usage, or when assets couldn’t be served over CDN, and more..

As in the world of computer programming and system design, most of these problems were already encountered by my peers in the same domain. The first such concept, which piqued my interest was the The Twelve-Factor App. Here, I understood the reasons and the indispensable need for separating concerns and entities.

The following is a very high level overview of my understanding of system design and architecture.

Most basic web applications do one thing and well. Create, Read, Update and Delete information on a relational database. When the user count increases, the database interactions increase. For a normal web application, the first point of bottleneck is the database.

In a simple web application, components are all hosted on the same server i.e. the web server, the database and the application assets all stored on the same server. When the user count increases, the server response time increases accordingly. The easiest solution is to add more hardware resources [RAM (memory), CPU (processing power)] by buying even bigger, faster, and more expensive machines. This is termed as Vertical Scaling. This architecture will provide performance improvement upto a certain amount of additional users. Once this threshold is breached, there isn’t much to be done on the existing server.

The next step would be to host the database on a separate machine and the web application on another. Again, this design only supports a number of users upto a certain threshold.

The new machine’s application codebase is either cloned from a repository or a Docker image is pulled and started inside it. The load balancer evenly distributes requests from the users onto the application cluster. Applications in the machines are updated by executing rolling restarts or by updating the Docker image versions.

When the building blocks are too simple,
the complexity moves into the interaction between the blocks.

This architecture presents a developer with a lot of questions. In the initial architecture, all code and user related data like profile pictures (assets) and login information (sessions) were stored on a single machine.

For assets, we use a centralised data store, which is accessible from all the scaled machines eg: Amazon S3, DO Spaces. For sessions, we utilise an external database/in-memory cache called Redis eg: Amazon ElastiCache.

As we horizontally scale the application servers, the next bottleneck is the database.

After a certain point, even the datastore reaches its limitation. Caches are values stored in memory (RAM) as a key-value structure. RAMs provide a lightning-fast response. Databases are battery included with caches. Tweaking these values according to the data/queries will provide better performance. When it comes to web applications, the data retrieval should first check the application’s memory cache. If the cache doesn’t hold value, it should query the database. This value is then updated in the cache for subsequent fetches. eg: Redis, Memcached etc.

A major delay for a web application happens when it interacts with third party services or executes a compute intensive task. An easy example is the verification of an email address as a new user completes his registration. The web page waits for the response form the third party service until the email sending process is completed. This delay downgrades the user experience. A better way to handle them would be to push the task to a queue, which are then picked by other processes and completes the task.

In this manner, data processing won’t act as a bottleneck if there is an unexpected spike in usage. Moreover, data in the queue isn’t lost and can work depending on the available resources. This asynchronous processing improves the application performance for time consuming tasks. RabbitMQ, Redis, Amazon SES are some queue management software used at LiteBreeze.

CDN (Content Delivery Network/Content Distribution Network) is a geographically distributed network of proxy servers and their data centers. A CDN allows for the quick transfer of (primarily static) assets needed for the web application like HTML pages, JavaScript & CSS files, multimedia content like images/videos etc. The number of requests to the web server is decreased as the assets are loaded from the CDN. Leveraging a CDN will speed up website delivery to the users & decrease the impact/load on the webserver.

Incorporating all the above features will result in the following architecture. 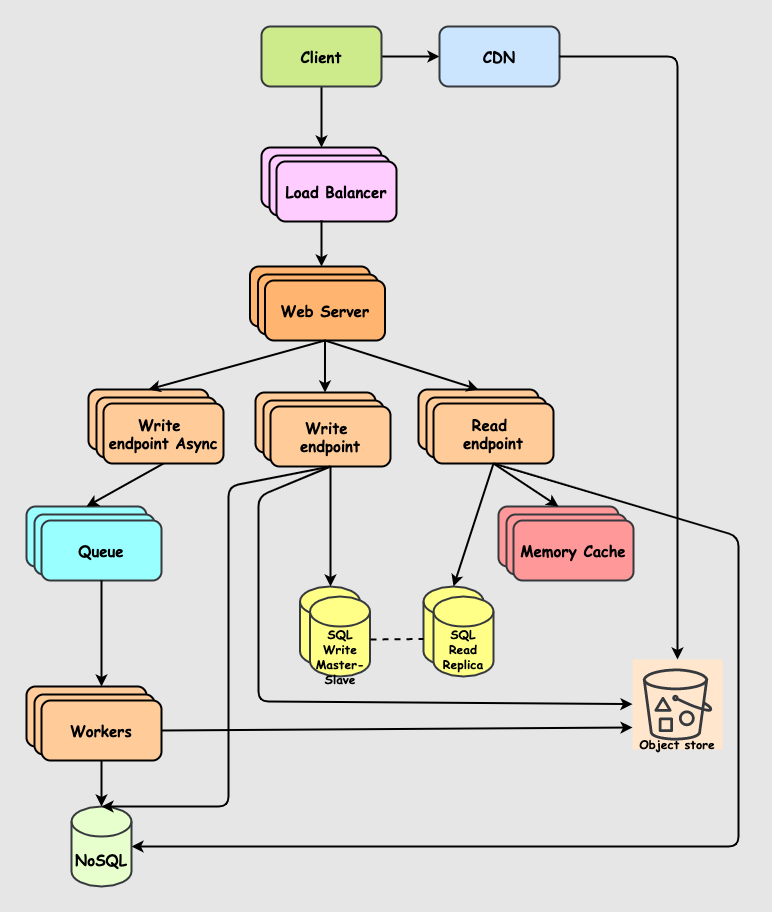 When our director mentions that we specialise in developing and maintaining complex web apps, this is the usual scale in which we work. The approach to system design depends totally on the web application requirement and its users. Common questions that will provide the outline of the system architecture are:

The above example isn’t a silver bullet. Each architecture needs to be studied differently and developed according to its requirements and users.

Your email address will not be published. Required fields are marked *